This was the reason why i can’t register myself in the e-houseman last week. It was actually an unplanned destination. We were supposed to go to Spain on the same date, but due to some circumstances with the tour agent we’ve booked, the trip had been cancelled. So untuk mengubat hati yang lara dah excited nak pi bercuti, we decided to fill in 3 more empty seats to Korea.
And I’m not surprised, Korea was indeed a good destination for a family trip.
Especially in winter? Eh..

Upon arrival at the Incheon Airport around 630am in the morning, we were greeted by the tasty aroma of coffee here and there. Although I’m not a fan of coffee, but seriously just from smelling can wake you up from jet lag of 6 hours flight. (Lil bit exaggerate there, but seriously I do).

Winter always be my favorite season back there in Russia. And because I thought that I had lived through an extreme weather, Korean winter is nothing then. So mates, if u’ve got that in mind, u should think again! Don’t u ever looked down. The winds were crazy here. It’s not freezing but it’s chilling. Hahaha.

As soon as we arrived, we went to Petite France, a French village in Gapyeong. 1 hour driving from Seoul. My tour guide, Jo Hyun said that, the place was built just like a village in a storybook loved by Koreans, “The Little Prince”. It is also a famous filming location of Korean dramas. Among them are Beethoven Virus, Secret Garden, and The Man from the Stars. I can see the K-drama lovers were very excited taking pictures of the filming site (Well I can imagine if they meet the real actors :p).

Hmmm, I don’t watch any of the dramas above so I just enjoyed my time strolling around.

We stayed one night at Vivaldi Park Sky Resort. The paradise of skiing and snowboarding. They have 2 beginner, 2 intermediate and 1 expert slides here. And this was the best of all. I can say that because I miss snowboarding very much.

Don’t worry. You can rent the ski outerwear and other equipment in plenty of rental shops on your way to the park. The rent price for the winter outerwear are 30 000 Won and for the ski/snowboard is 30 000 Won too. Well, it’s better than bring all the way from Malaysia isn’t it?

Ok, only one word to describe here……..AWESOME

No more holding maps.
No need to think about eating spot.
Less walking. 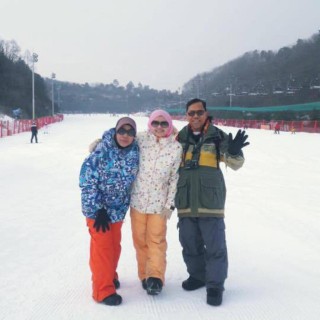 What i wrote so far